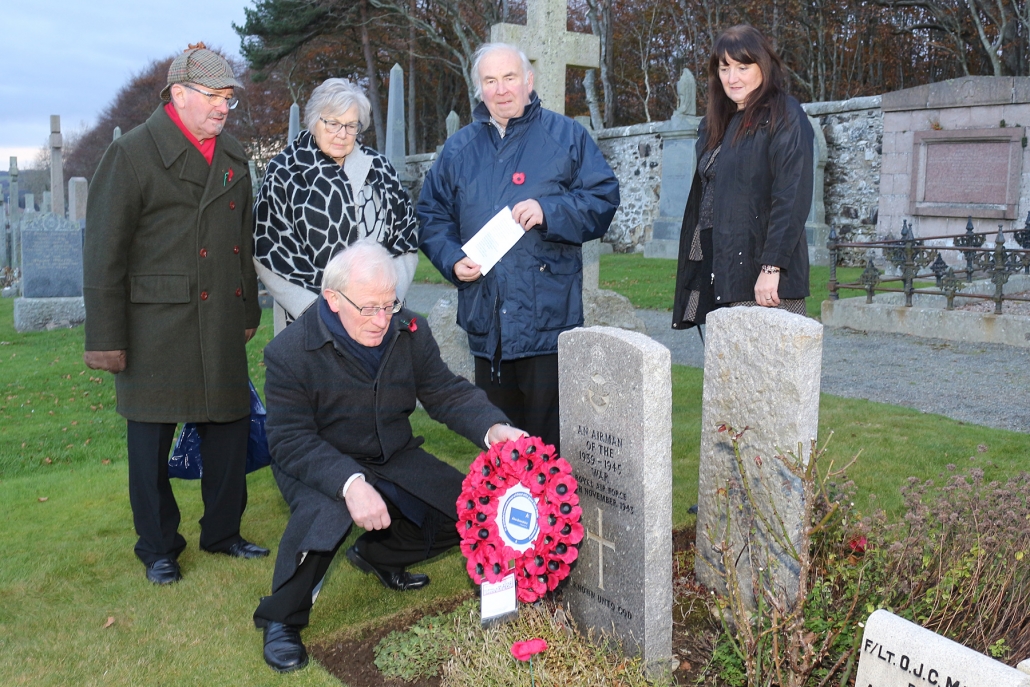 There are eighteen Commonwealth War Graves from the Second World War in Banff.  These are only a few of the airmen killed serving at the Boyndie base. Only those whose planes crashed in Scotland are buried in Banff. If you were shot down over the sea or over Norway there will be no grave. One of the Canadians and one of the Australians had brothers who were shot down over Europe.

One is of an unknown airman, so that is where, if we have a wreath, we lay it. Four were from England, seven from Canada, four from Australia, and two from New Zealand. One, called William Reid, was from Britain, but we don’t know where.

Of the British airmen, one was a doctor’s son from Surrey, one the son of a warden at Parkhurst prison on the Isle of Wight, and another came from Bethnal Green in London.

Two of the Australians came from neighbouring suburbs of Sydney, and one from just outside Perth in Western Australia. The other came from the outback in Queensland, a small place called Winton, where they have an annual festival because ‘Waltzing Matilda’ was first performed there.

The New Zealanders came from in or near Auckland, in the North Island, but the Canadians came from all over, from Edmonton, and Ottawa, and Saskatoon, and two from small places in the prairies. The one from Ottawa had three Christian names, Louis Eber Eldred, but apparently answered to ‘Tony’. The man from Saskatoon was not only married but had two small children, and this may explain why this is the only grave that has recent mementos from the family on it.

And then there was Ernest Raymond Davey, who came from London, Ontario, in Canada. (I think people called him ‘Bus’.) He wrote a poem, found after his death, called Extinction: the Airman’s Prayer which was put into a book. It is a serious Christian poem; at home, he was a loyal member of the Anglican Church of Canada. It is easy for us to imagine how we would like to face our death when it comes. It is different for someone who is actually facing it.

Here it is, from Soldier Poetry of the Second World War: An Anthology, ed. Jane and Walter Morgan, Presented with the permission of the Department of National Defence, Government of Canada. Oakville: Mosaic Press, 1990: 45. RPO

Almighty and all present power

Short is the prayer I make to thee;

I do not ask in battle hour

For any shield to cover me.

From which the stars do not depart,

May not be turned aside to stay

The bullet flying through my heart.

I ask no help to strike my foe;

I seek no petty victory here;

The enemy I hate, I know

To thee is dear.

But this I pray, be at my side,

When death is drawing through the sky;

Teach me the way that I should die.