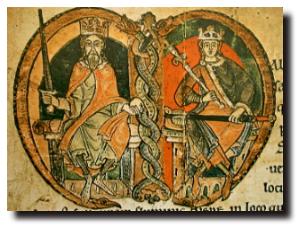 King David I of Scotland, who reigned from 1124 to 1153, once held court in Banff. The monks of the Pictish abbey of Deer, over in Buchan, copied a charter from the king into the Book of Deer, and the charter says that the monks had made their case before the king at Banff. The Book of Deer still exists, so here, in 12C hand-writing, is clear evidence of a 12C king holding court in Banff.

David I was the son of King Malcolm Canmore and his wife St Margaret of Scotland. When he was nine he went to England with his sister, who married King Henry I of England. David became Earl of Huntingdon in England. Two of his older brothers were kings of Scotland before him, so we had three “sons of Margaret” on the throne. David brought Norman barons back to Scotland with him, including the families of Balliol, Bruce, and FitzAlan (later Stewart), all of whom became the royal families of Scotland in turn. King David built many monasteries, which led his descendant King James VI to call him “a sair sanct for the croun” (a sore saint for the crown). He was in fact, a good king, remembered as St David of Scotland, and his feast day is May 24. Few kings since have been considered saints.

The picture shows King David with his grandson and successor, King Malcolm IV, and comes from a 12C charter of Kelso Abbey, which he founded. Early medieval art was not very skilled at catching a likeness. We can tell them apart because the young king Malcolm the Maiden was beardless.

We should show you the evidence that the king was in Banff. It was a royal castle. Kings would go round their castles, and they and their retainers would eat up all the food in store, and then move on to another. Other kings came here later for the same reason.

Look where the handwriting changes in the page, with a big D for David at the start of a line. Four lines down can you see ‘ap. banb’? That is ‘at Banff’.

So there we are.

The Book of Deer will be on display in Aberdeen in the summer of 2022, so you can go and see for yourself. 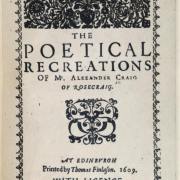